Well, it’s been a week now with Mifune/Allston/Doofus/Damnit (choose one) and what a week it’s been.

The Name Thing. Maybe he responds to Allston, maybe he doesn’t. I’ve been calling him Mifune when I think about it, Jazz when I don’t. I think I’ll be making that slip for a while. This is one of the reasons I chose not to have kids. A very small reason. More reasons will sprout in these pages. Digger was also a candidate, seeing as how my backyard has more holes than ‘A Day In The Life!’

The Cat Thing. The scars are healing nicely since their first encounter, thanks. For the last week, it’s been a game of room switching when Kaiju would come home. Lock the dog in bedroom so the cat could be in the mudroom; Cat in bathroom, dog in mudroom, me outside. How did that happen? Panzer (d.v.m., acupuncturist, all around good guy, dog bless him) came over last week and met the dog. He brought a couple vials of flower essence over: Quaking Grass (briza maxima) and Walnut (juglans regia). The Quaking Grass is for helping to establish household order and the Walnut is for major life change (something everybody in the house has gone through in the last month). A couple of drops in their water and stand back!

OK, not one minute ago, they were nose to nose with no blood loss! Outstanding!
Never mind’ back to square one. Film at 11.

The Dog Park Thing. When I went through the application process with Pit Bull Rescue, I told them that I would be taking the dog to the dog park as part of its exercise regimen. No No No, said they! People will freak out when they see a pit bull charging down on their Shi Zhu. I probably would, too. Anyway, after being dragged around the marina and plodding around easily escapable schoolyards, we headed to the off leash area near the house, overlooking Puget Sound. I think we were almost through the gate when he bolted up the hiking path. 10 minutes later, we’re inside and all is well. As I’ve mentioned before, THE DOG IS FAST! Kind of does the greyhound or racing horse thing, tucking his legs in and the exploding forward. Brakes? We don’t need no stinking brakes! He’s only shown aggression when dry humped by some other stupid dog. He gives them fair warning before going into the classic ‘I’m a Pit Bull with Large Sharp Teeth and I Will Tear Your Throat Asunder If You Do Not Persist in This Most Uncouth and Futile Act.’ The first time this happened, the offending dog’s human commented that our dogs don’t get along. I felt like mounting him from behind and asking him if he liked it! Probably would. Another reason why I don’t have kids! The dog has also found a way to escape from the off leash area.

The Dog as a Replacement for Jazz Thing. As reported earlier, this was neither the intention nor the reality. There will never be a replacement for Jazz. The reality is that this dog is a 4-legged Panzer tank with a bladder the size of an Olympic swimming pool that slobbers a lot!

The Dog as a Destructive Force of Nature Thing. So far, he’s chewed up 2 of his blankets, 1 Godzilla, anything with shoelaces, anything I’m wearing, my right hand, my desk, and the back porch’

Note 1: 15.5 hours until 2 weeks. I had the cat in my lap and the dog sitting at my feet. I was not, repeat not, wearing inch thick leather pads, Bad move on my part. All was well until the dog, who just loves to sniff butts, put his nose where it just didn’t belong. I’ve been waiting for Kaiju to let him have one across the nose. Well, tonight’s the night, as the song goes. No blood was drawn; the creatures went to their neutral corners and are, even as we speak, sitting this round out, though the dog is chomping at the bit (literally) to go again.

What was I thinking? 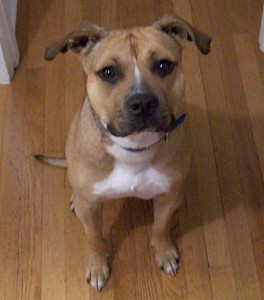 If he has a name (Allston was supplied), he either doesn’t know it or chooses not to acknowledge it.

He is a male Pit Bull, approximately 1.5 years old. Abandoned, neglected, maybe abused. Fawn colored with a white belly and a white stripe running from his forehead down to his nose. Knee high. Weighs in the neighborhood of 60 pounds. He is a big baby. A very powerful big baby.Did I mention he and the cat haven’t quite seen eye to eye? Hmmm … well, sooner or later. I’m hoping for sooner. Kaiju (kitty) lived behind the bathtub for 2 weeks before she figured out that Jazz was cool. Of course, Jazz didn’t lunge at and chase her through the house. Kaiju is pissed at the dog and me. The dog just wants to be friends and so do I. I think my watchband will cover up last night’s scars. If you’ve never held a hissing cat, my advice is to not. Misdirected rage, fear … skin.

Anyway, it’s been over 3 weeks since the death of Jazz, my doggy companion of over 13 years. Those were the worst 3 weeks of my life following the best 13. I was never good at fractions, but I believe the good outweighs the bad in this case. Alas, the smaller number seems to be more concentrated, almost overshadowing the larger.

Allow me some explanation as well. I just spent almost one third of my life with one dog. I love Jazz to pieces and his passing kicked the shit out of me. I still have a hole in my heart the size of the Grand Canyon. My getting another dog is not a stopgap rebound knee jerk reaction. I’m used to having a dog. This dog needed a home and I need a dog. I was going to foster one, but why get attached to someone knowing you’re going to lose him or her soon? I understand the importance of fostering, but now’s not the time. When I own my own island, I’ll foster every animal that comes my way, unless it’s a shark or something like that.

3 minutes until 24 hours. I now know that he’s a digger. He just dug out most of the back porch. He was able to do this because I thought it was safe to leave him unsupervised in the backyard this time. The 2 times before I discovered that, in addition to being a digger and he can stand on his hind legs and knock just about whatever he wants off of the kitchen counter, he’s a jumper of some ability. 4-foot fences are no obstacle.

So I found a long leash with a kind of choke chain that doesn’t seem to choke him, or for that matter, stop him. It gave me about 45 minutes of peace and computer time without having to repot the palm and chase biscuit crumbs. He seemed to be content playing with his tug rope and red bouncy thing, or so I thought. We had to dig some lawn up a few days ago because there was a possibility of a broken water pipe, so there was some loose topsoil lying about. But that was by the gate, not the middle of the yard, and not in such quantity.

The Great Escapes. Twice this morning. First time, I thought he jumped over the garbage cans. The second time, as I was covering the hole to the garbage cans, I swear I turned my back on him for 15 fucking seconds and he was gone, hence the mention of the fence. Realize, firstly, that this dog is FAST. Cheetah fast. With gravity and motion on his side, he’s already taken me and my neighbor down. I’m thinking he’s a mile away by now. Did I mention that he’s fast? He is. But he seems content (so far) to exploring no further than a few blocks and seems genuinely happy to see me when I catch up to him.

Reviewing: jumping digging strong fast slobbery leaping tugging cat curious sweet handsome stupid dog. He slept by my side, dreaming and snoring loudly all night. I missed that touch so much. Oh yeah, even though I outweigh him 3-4x, he still managed to occupy the whole bed. Unmovable. I cannot budge this fucking animal! He has managed to quadruple his mass! That’s ok, but I’m wondering what else the foster parents neglected to tell me? He came with a king sized doggy crate and, as much as I hate confining animals, I’d hate to see what he comes up with when he attempts to dig up my bed or the studio floor.

It’s 26.75 hours now. I haven’t seen the cat since it was sunny. It is now starting to rain. I’ll have to segregate the critters when I can coax her inside. Have to leave for work in a while. Why can’t we all just get along and do what the fuck I say?

Just got home from work. The cat was waiting outside for me and an explanation. After some maneuvering, the cat’s inside and the dog and I were out for a walk. The dog (whom I am calling Mifune for the meantime) knows that Kaiju is in the mudroom but can’t get to her. I think I’ll wait for some of the scars to heal before I try introducing them again.

OK, that’s it for the first day. I’m committed to this dog. He’s really quite a sweetheart (if you like destructive forces of nature!) Imagine Lassie and tabletop fission.

Where to buy PJ Stuff