Of course I’m talking about Monster Island. It’s also been referred to as Infant Island, Mothra Island, Farro Island, Fantasy Island, Manhattan Island and a few more that don’t come to mind readily.
Why yes, Virginia, I did finally complete my Godzilla Movie collection. *
To a degree.
As in nobody, I MEAN NOBODY in their right fucking mind would consider the abomination released in 1998 to be a Godzilla movie, just as nobody considers any beverage with the words ‘Light,’ ‘Lite,’ ‘Diet,’ ‘New’ and/or ‘Improved’ to be BEER, or even drinkable for that matter.
So, yes and no. Obviously, the original ‘Gojira” and “Godzilla, King of the Monsters (Beer)’ are 2 totally different movies, even though they share a lot of the same footage. But as Gojira was a warning of the ‘New and Improved” Atomic Age which we found ourselves going to without an invitation, ‘Godzilla, King of the Monsters (Beer)’ was a warning of us fucking up everything we touched.**
Aside 1: In 2007 I needed a new passport because I thought I was going somewhere, anywhere. I don’t remember where my mom said we were going that we needed passports and I’m assuming I had recently watched a Godzilla movie where they refer to Monster Island as Farro Island.
The Faroe Islands, of course, are off the coast of Scotland where adolescent Danish (Doughnut) boys frolic with long knives and dolphins. That would certainly apply as Monster Island, but since we were going to Hawaii and Hawaii is closer to Japan than Scotland and Monster (nee Farro) Island is closer to Japan than Detroit, I wrote Farro Island on the passport application, not knowing if I meant Monster Island, Faroe Island (I assume not) or some other Island near the Hawaiian chain (Cuba?).
Turns out wherever we were going to: 1) didn’t need a passport, 2) nobody who should’ve been paying attention was and 3) we didn’t go anywhere anyway.
So
Obviously, the best movies are in the original Japanese with subtitles and you have the choice between the Japanese and English language versions. It’s amazing how radically different, say, Invasion of the Astro-Monster is from Godzilla vs. Monster Zero, which is how I knew it growing up and watching 9 times a week on Channel 5 in Los Angeles (their idea of Movie of the Week was to play it Monday-Friday at 7:00 pm, then twice back to back on weekends). The Japanese versions are much deeper and thought provoking than the dummied down versions in English.
Just saying
So
Nicole was under the impression that, when I said Godzilla Marathon, I was actually going to watch them in a single sitting, in order, in Tohoscope. Maybe if Fat Dog Pizza in Tillamook delivered. Maybe if I still drank. Maybe if I quit sleeping. No, not yet. Hell, I’d still be watching, not writing. Of course, would I just watch the original if I had the option? I have 7 films on VHS where it’s dubbed or nothing. Then there’s the other kaiju eiga (sp): Rodan, Mothra, War of the Gargantuas, H-Man, Warning From Space, Attack of the Mushroom People. It would be like the time I watched seasons 1-5 of LOST in one session.
So
As interesting as that was, you’ve got to be asking yourself, “Self, as interesting as that was, why didn’t he lead off with late breaking medical news?”
So
Do you really want to hear me play guitar again? Really? I mean, I do, but I have an obvious bias here. I truly cannot wait to get back into the studio and start working, but we’re looking at next year at the earliest. The neck is feeling better, the hand is feeling worse. Fair exchange? Hmmm…..
Aside 2: I was telling Research Assistant Mifune about the surgery and hospital stay, etc. At least he appears to pay attention. I know he’s waiting for the biscuit. Anyway, I was telling him about the cool space age thermometer wherein they just pass this little orb across your forehead and there’s your temperature. Mifune chose not to believe me. I almost told him that you could also stick it under your tongue or armpit, but then thought better of it. He knows one way and one way only.
So
For the time being, I’m on Injured Reserve. Trying incredibly hard to take things slow and easy.

The family was out for a week just now. Hadn’t seen my cousin David since 1977 or met his wife, although their oldest son (whom I didn’t know existed until 3 weeks ago) stayed at Mole End for a couple of nights on his way up the coast. The weather put on its Summer face and I ate a lot of grapes, although I have something in my eye.
Partial Aside: The last 2 sentences were written late last night/early this morning. I’ve been out of grapes for a few days now and the thing in my (left) eye is gone.

Cousin Dan(ny) was there, too. Haven’t seen him since 1998 or 97. He looks like our grandfather, so chances of him being adopted drop below the safe betting line.

As reported earlier in these pages, my buddy Stemi Root sent me my first release, “Standing Is Stupid,” circa 1984. I transferred it to HDR, tried to clean it up and made its CD debut yesterday. If what Matt Jorgensen (sp) says is true, I will be able to paste the cover here…. 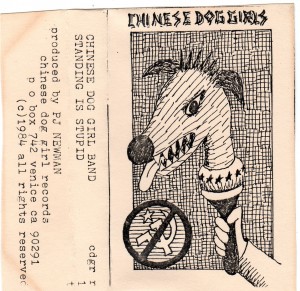 For those of you whom have been down to Mole End recently have seen the explosion of Bamboo and Japanese Maples in the yard (well, 8….). It’s something to do. My neighbor mentioned that there was going to be a BIG SALE at the Bamboo Guy in Beaver. I tried stopping by a few times, but nobody home. They (he) are (is) having a Going Out Of Business Blowout. Everything $20. Everything. So my yard has a whole bunch more today and will have even more tomorrow. Problem is, sure, the plants are $20, but the ceramic pots are still $50-80 if you can find them on sale. Let’s just say that there will be more plastic planters in the yard for the time being, or is 2 months worth of rent worth something that only a handful of people will see for the foreseeable future?
And why is the theme song for F Troop looped in my brainpan?
Speaking of birds, we are hosting a pod of Asian Pigeons or Asian Doves. Whatever (whom) they are, as I was outside trying to find the perfect spots for my newly acquired Asian greens, the dovepigeons were lining up on the power lines……just staring at me! As if they’re going to go all Hitchcock on me or worse.

I’d love to stay and chat some more, but I’ve been invited to a crab feed down the street. I hope they caught some vegan crabs.

* I spoke too soon. I was, in fact, missing Godzilla Against Mechagodilla (or Godzilla x Mechagodzilla for those of you playing at home). Come on, with Mechagodzilla in the title of 5 movies, I’m allowed one mulligan. Consider it rectified.

** Actually, I guess that applies to everything…

Where to buy PJ Stuff